Presently, the employees of Gujarat have been fixed as per the salary norms under the Gujarat State Service (Salary Improvement) Rules - 2016. Now, at the current 12% rate of inflation allowance of employees and pensioners of the State Government. The Government has been considering the issue of raising 5% to 17% with effect from 1/7/2019. 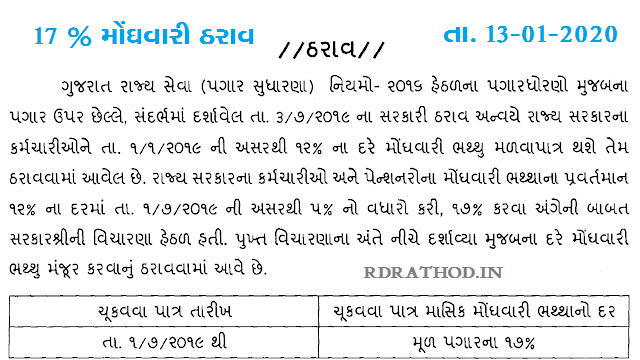 17% Inflation Official GR. Circular for inflation rate as per 17% of Gujarat employees

Latest GR to pay the dearness allowance available to the employees of Gujarat State Government and Panchayat from 01/07/2019 through the month of January - 2020.
Recently, the pensioners of the state government of Gujarat have been provided the pension. Mumba should be paid on temporary surplus available from 01/07/2019. Ta. Effective 01/07/2019. Orders will be made later regarding payment of difference between 31/12/2019. These orders, whose provident fund accounts are owned by the state government

All the employees of the State Government of Gujarat as well as the educational and non-educational employees of the Panchayat employees, secondary schools and higher secondary schools, non-government schools receiving auxiliary grants will apply to the employees whose salary has been granted as per the seventh pay commission with the approval of the state government. The benefits of these orders will be attainable with the appropriate modification of primary teachers and employees who have been transferred or transferred to the panchayat as well as employees on the work force who have been approved salary reforms in accordance with the Salary Commission.

According to the prevailing policy of the Gujarat state government, this increase in the mondhwari allowance will be available to those who are paid salary reforms according to the seventh pay commission.
17 % MOGHVARI GR | CIRCULAR FOR INFLATION RATE PER 17% FOR GUJARAT EMPLOYEES