RDRATHOD
23 Jun 2020
Facebook Twitter
Government of Gujarat Electricity Bill Waiver Scheme Official Letter | The state government will pay the bill up to 100 units. Letter from Gujarat Department of Energy and Petrochemicals regarding relief in electricity bill to the electricity consumers of Henank under "Gujarat Atmanirbhar Package" 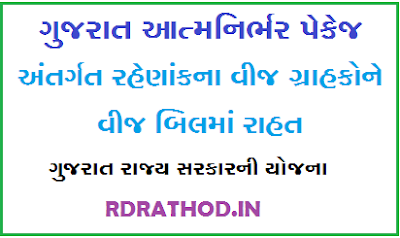 .Letter from Gujarat Department of Energy and Petrochemicals regarding relief in electricity bill to the electricity consumers of Henank under "Gujarat Atmanirbhar Package"
Reading:

(1) Resolution of the Finance Department dated 05-06-2020: "Lockdown" orders have been issued by the Central Government and the State Government due to the extraordinary situation arising out of Corona virus (COVID-19). In this regard, to help the power consumers of the state, relief has been given by the resolution of the department dated 27-06-2020 and thereafter dated 11-05-2020 as well as dated 07-05-2020.

Gujarat Self-Reliance Package has been announced with the resolution dated 05-06-2020 against the number (1) taken by the Finance Department to revive the economy of the state after the closure of trade / business / industry by the state government. .

"Consumers who consume less than 200 units of electricity will be exempted from the one-time electricity bill of 100 units.

As a result, about 900,000 electricity consumers in the state will get the benefit of Rs 900 crore electricity bill waiver. The modus operandi in this regard was under consideration.

It is therefore decided to carry out the following procedure in the matter presented by the State Government at the end of the above consideration.

(1) Multiply the difference between the last meter reading before the lockdown and the first meter reading after that by calculating the power consumption per day for 30 days. If the power consumption is 200 units per month or less then the customer is given one time relief. Will be eligible for and such electricity customers will be eligible for exemption of maximum 100 units and one month feed charge.

(B)
In the above example, the actual power consumption is less than 100 units, so only 86 units and one month fixed charge will be waived.


(C)
In the above example monthly power consumption is more than 200 units. So such customers will not be eligible for this month. 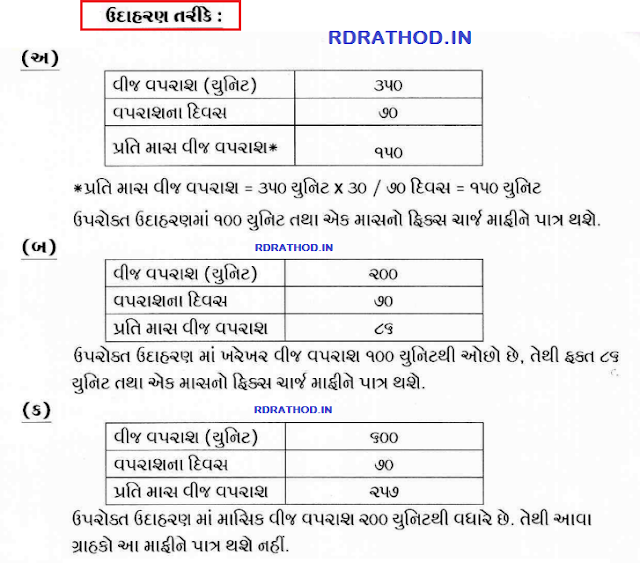 (2) The benefit of this information / relief will be given to the eligible small and middle class residential electricity consumers of all the power finance companies of the state in the next bill.

(3) The financial burden for this will be paid to the power finance companies by the State Government.

(4) The amount waived by the authority shall be clearly mentioned in the electricity bill.

(5) The power companies have to complete all the procedures regarding the electricity bill and the beneficiaries who are really entitled to the benefit as per the criteria as well as the request for reimbursement of the waived electricity bill should be sent to the Finance Department through the Department of Energy and Petrochemicals.

Reimbursement of the actual waiver under this scheme will be made by the State Government, by order of the Governor of the State of Gujarat and in his name.
Facebook Twitter