Chitrakoot Award is given every year by Snehishri, Pujya Moraribapu for sending the file for Chitrakoot Award.  For the award of the current year 2020, from the office list dated 03-11-2020, it has been asked to write a letter to the President / General Secretary of each ZPA and the office bearers of the State Union and send the file for the Chitrakoot award by 30-11-2020.

However, files have been recovered from 33 districts including Valsad, Navsari, Narmada, Kheda, Dahod, Sabarkantha, Aravalli, Mehsana, Patan, Morbi, Junagadh and Jamnagar.  So the remaining districts are asked to send the file from their district by 20-12-2020. 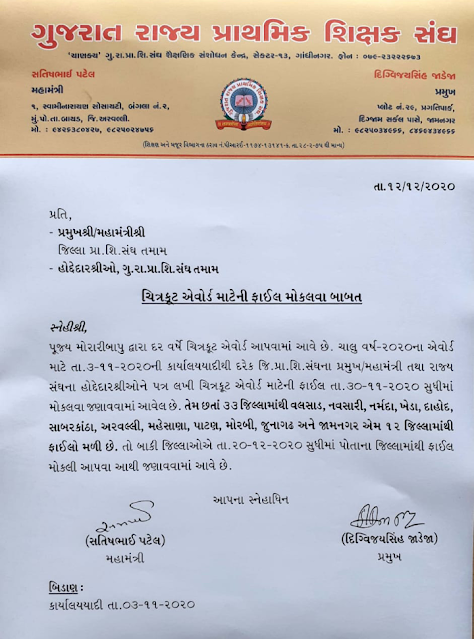 Chitrakoot Award for Best Primary Teachers: Every year Chitrakoot Dam Talgajarda, Ta. Mahuva, Dist. The teacher is honored with the 'Chitrakoot Award' at Bhavnagar at the hands of Pujya Moraribapu with a dedicated spirit for the holistic development of schools and children in the primary schools of the state.

About Chitrakoot Award -  ...
The Chitrakoot Award for the current year - 2019 will be measured in January - 2020. From this year, the award will be given to Pujya Moraribapu to all the districts (including District Pune and Municipality, District Wise Mac). Forms are sent to the President / General Secretary of each District Primary Teachers' Union and the State Hodedarshree. District Wise 3 (Three) Kyle must be sent in the Expert Form. The files are signed with the recommendation of the President of the District Union - Minister of Labor - Coins. Right? Pvt. Sh. Sangh's office "Chanakya" at Gandhinagar We will send it by 3-5. To receive this award, consider the following:

Chitrakut Award for Teachers, Rules and Application form:
• The teacher has to take at least 5 years of employment for this award.
(State or national award received and the CRCR / BRC and State, District or Taluka Sangh Hodadarshir do not propose for the award.)
• The form prescribed by the State Sangh for this award has been given to the District Primary Teachers Union President - General Secretary and the State Holders. Which request to receive from them.
• Do not place unnecessary certificates of proprietary qualifications - certificates in the file.
• Do not include unnecessary notes of daily activities of the school.
• Only district and state level certificates should be included.
• Talukas - To base the work done at the district level or state level.
• Include only the candidate's name or presence in the school's photos or certificates.
• Things that are not supplemented with this operation - do not leave writing, writing. In the school, to present the basis of works, researches, articles, camps, etc., which are conducive to out-of-school education, and to place certificates for those who have received local training.
• Teacher profile. P. F . Do not display unnecessary details like PAN Card, Aadhar Card, Blood Group, Bank Account etc. General Chat Chat Lounge