Big news for those who have invested in the Modi government's Sukanya Samrudhi Yojana, there have been 5 changes in this scheme. 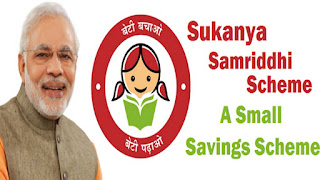 1. The interest rate does not change on account default

As per the plan, Rs.  250 per year.  If there is no credit, it will be considered a default account.  The account cannot be reactivated under the new rule.  Sukanya Samrudhi Yojana earns 6% interest.  The interest rate on post office fee for savings account is 4%.

According to the new changed rules of the scheme, Sukanya Samrudhi Yojana has been allowed to close prematurely in case of death of daughter.  In the old rule the account can be closed in 2 positions.  Death of one daughter and change of address.

3. Change of account opening rules for more than 2 daughters

Under the new rule, the daughter will not be allowed to run the account until she turns 18.  Under the old rule it was allowed to do this in 10 years.  Now the account holder will be able to manage it only after the daughter is 18 years old.  Documents must be submitted to the bank or post office at the age of 18 at this time.

This new rule also removes the facility of changing the wrong amount in the account.  Apart from that the amount will be credited to the account at the end of the financial year based on the new rules.

SSY Scheme : If you haven't opened an account yet, open it ...

Betty Bachao to launch self-sufficiency and uplift of the country's daughters - Prime Minister Narendra Modi launched the Sukanya Enrichment Scheme in January 2015 in the Beta Padha campaign.
The PPF account is called the account which is opened for the girls under this scheme. An account can be opened in the name of the daughter at the bank or post office. The scheme is designed for the bright and secure future of the daughters.

You can deposit at least 250 per year and a maximum of Rs.150,000. The interest rate of the account on the amount deposited is notified from time to time by the Finance Ministry of India. Interest rate is determined every financial year.
Under the new rule, 100% of the amount can be deducted on the marriage of the daughter. Taxes are exempt under 80-C on deposits. No interest is paid after the daughter turns 21.
How to open a plan account? Visit the nearest bank or post office to get the Sukanya Enrichment Scheme form. Photograph the daughter and fill in the form details. Attach Xerox copy of all required documents. You can bring the form home and complete it and submit it later. You can also download the scheme form from the RDRATHOD.IN website.

1. Form of the Sukanya Enrichment Scheme2. 2 passport photographs of daughter and mother and father3. Daughter's birth certificate4. Copy of Aadhaar card or other identification card of the mother or father5. Proof of residence (electricity bill, ration card, driving license, election card, any one)                        - With such a copy ..
Important Essentials ... If you forget to pay a year, you have to pay a penalty. You can deposit money whenever you want during the year. If you have two daughters, you can open two accounts. But even if you have more than two daughters, you can open at least two accounts. Online deposit facility is also available.
Download Sukanya Samriddhi Yojana Full Information PDF Copy
Download Sukanya Samriddhi Yojana form