Home/ News/With the Corona in mind, the government has allowed withdrawals from the PF. Withdrawal will not be refunded

With the Corona in mind, the government has allowed withdrawals from the PF. Withdrawal will not be refunded

From June 1, the PF account must be linked to the Aadhaar card. With the Corona in mind, the government has allowed withdrawals from the PF. Withdrawal will not be refunded.  All employees were allowed to withdraw the excess amount from their provident accounts in view of the economic woes created due to.

Developed a system called Auto Claim Settlement Process for withdrawal.  Members from PF account holders who have completed the Know Your Customer process will be able to apply for immediate withdrawal. 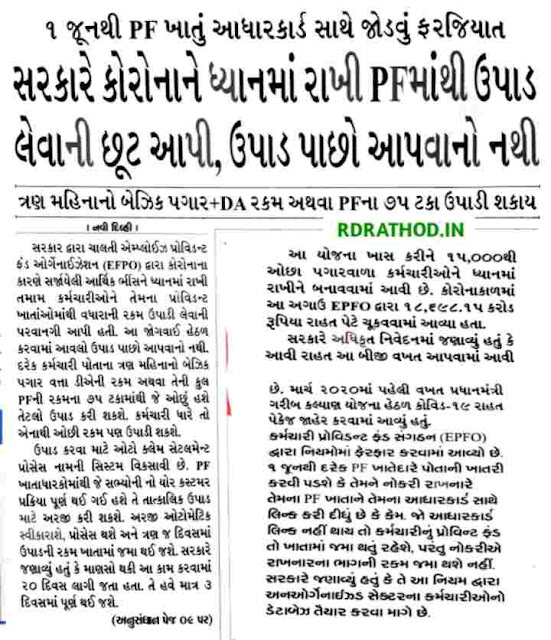 The application will be automatically accepted, processed and the withdrawal amount will be credited to the account within three days.  The government said it would take 20 days to get the work done by men.  It will now be completed in just 3 days.

The scheme is specifically designed for employees with a salary of less than 15,000.  Earlier, Rs 18,698.15 crore was paid by EPFO ​​as relief during the Corona period.  The government said in an official statement that this was the second time such relief had been granted

In March 2020, the Covid-15 relief package was announced for the first time under the Pradhan Mantri Garib Kalyan Yojana.  The rules have been amended by the Employees Provident Fund Organization (EPFO).

From June 1, every PF account holder will have to make sure that their employer has linked their PF account with their Aadhaar card.  If the Aadhaar card is not linked, the employee's provident fund will continue to be credited to the account, but the employer's share will not be credited.

The government said it wanted to create a database of unorganized sector employees through the rule.