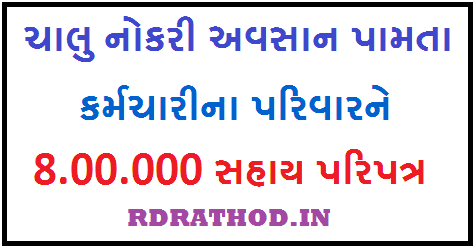 To pay higher financial dues to the dependent family of employees of Class-3 and Class-4 who have died during their current employment from the date of 5-7-2011 and the resolution dated 13-10-2015, as shown against reference (1) and (2) of the General Administration Department. The plan is currently in effect, according to which, the higher financial support is paid accordingly, considering the remaining period of service of the employees.

Considering the interest received in the current period against rising inflation, it was under consideration of the Government to increase the amount of higher financial assistance paid under the scheme by taking into account the recommendations made by the approved employees of the State Government on increasing the amount of humanitarian assistance.
At the end of adult consideration, the government decides the following.

(1). The amount of higher financial assistance to the dependent family of Class-3 and Class-4 employees who died during the current employment on or after 1-4-2016 is Rs. It is decided to pay 800000 (eight) lakhs.

(3) These orders shall be filed on the same rank file of this section as the Finance Department. With the approval dated 29-3-2016, it is sent out.