All Primary Education Paripatra Super Collection, Download All in One Paripatra PDF 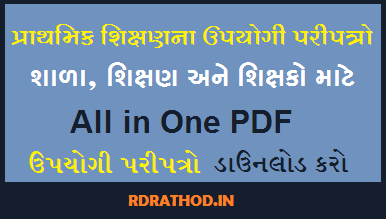 Download a super collection of all the circulars useful for primary education.

The school must be full-time (10:30 to 5:00) on the day the accreditation process takes place.  Attached is the district wise list of schools which are to be accredited by the School Inspectors (SI).

The series of webinars on the theme of 'Dekho Apna Desh' is to be organized according to the above topic and context.
Minister of State for Tourism and Culture, Government of India, New Delhi, Ta.  According to the letter dated 11/11/2020, a series of webinars has been organized by the Ministry of Culture on the theme 'Look at your country' under the History and Culture of India.
Pursuant to which students of all schools in the state have been asked to participate in the main labyrinths.
So all the primary schools under your jurisdiction are instructed to give necessary instructions in this regard.

Regarding the instruction of Hon'ble Secretary (Primary and M.Sc.) to keep 100% teachers present in the school concerned on the day of school accreditation.  Is, it is to be visited by schools.
GCERT provides information on which school will be visited on which day.  All of you will be given in advance by Gandhinagar.
Accordingly, instruction is given to all the schools immediately to ensure that 100% of the staff of the school is present on the day of the school accreditation visit.

Sir/Madam Fit India Mission has planned a webinar on Indigenous Sports of India "Desh ki Mitti, Desh Ke Khel" on 29th January 2021 at 5 PM as part of Republic Day celebration 2021. The idea is to encourage youth towards fitness and sports in their lifestyle.

Young population in the age group 8-16 will be on focus. The webinar will have a panel discussion involving 4-5 celebrities/ sports personalities who will talk about their favourite indigenous games and how it helps in staying fit and active. The webinar will also, include a few snippets of the games being discussed. 2. The webinar will be streamed on the official FIT INDIA YouTube Channel.

Recently, a message has been circulating on WhatsApp.  In which PIL filed by a retired ISRO scientist.  The news about the newspaper was a slip of the news.  Seeing that, I wondered if the reality would be the same.  Have to enter.  In the same WhatsApp, the Chhattisgarh High Court recently ruled in favor of the CPF.  A landmark judgment has been announced for the conversion of employees into GPF, a copy of which has been circulated.  This judgment is not normal.

Let me also tell you that according to a friend like you, there are four states in India, Madhya Pradesh, Uttar Pradesh, Bihar and Chhattisgarh, where CPF  GPF has been discontinued. The disadvantages of CPF employees as compared to GPF employees have been shown in a separate table.

Note the details below