What difference between gpf and cpf in india See in Hindi

Most Important It's the question of our survival . The letter mentioned below is in Gujarati . 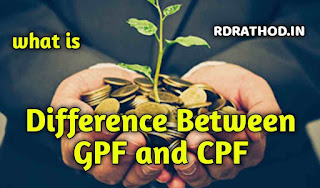 difference between gpf and cpf in india hindi

Recently, a message has been circulating on WhatsApp.  In which PIL filed by a retired ISRO scientist.  The news about the newspaper was a slip of the news.  Seeing that, I wondered if the reality would be the same.  Have to enter.  In the same WhatsApp, the Chhattisgarh High Court recently ruled in favor of the CPF.  A landmark judgment has been announced for the conversion of employees into GPF, a copy of which has been circulated.  This judgment is not normal.

Let me also tell you that according to a friend like you, there are four states in India, Madhya Pradesh, Uttar Pradesh, Bihar and Chhattisgarh, where CPF  GPF has been discontinued. The disadvantages of CPF employees as compared to GPF employees have been shown in a separate table.

Note the details below

If an employee has a GPF.  If the benefits of the scheme

When the same employee CPF.  When availing the benefits of the scheme

What difference between gpf and cpf in india See in Hindi

Calculate NPS (National Pension Scheme) returns online
The NPS calculator allows a person to calculate the temporary unit amount and pension amount they can expect to retire under the NPS based on a monthly contribution; Purchase annuity, expected rate of return on investment and annuity. The NPS calculator shows only provisional pensions and does not guarantee exact figures.
Who can use NPS Calculator?
The NPS Calculator can be used by all individuals who are eligible to invest in the National Pension Scheme.
Eligibility Criteria: NPS rules state that all Indian citizens who are above 18 years of age but not above 60 years of age are eligible to invest in the pension scheme. In addition, applicants need to follow the Know Your Customer (KYC) guidelines to start investing in the NPS scheme.
How to use NPS calculator
Here's a step-by-step guide to using the NPS calculator:
First, you need to enter the following details sequentially:
Date of Birth (DOB) - The calculator will calculate how many years you will be able to contribute to the scheme after entering your date of birth.
Investment Amount - Enter the amount you want to contribute each month.
Expected Return on Investment (ROI) - Choose your desired return on investment.
Percentage of purchase annuity - This is the percentage of corpus, i.e. pension money that you want to reinvest to buy annuity at maturity. An annuity in NPS is a pension that an NPS subscriber receives annually from an Annual Service Provider (ASP).
Note: The percentage of reinvestment in annuity cannot be less than 40%. However, if you are planning to exit the scheme ahead of time i.e. before the age of 60, the minimum percentage of the pension amount to be reinvested in the annuity is 80%.
Expected annuity rate - Enter the expected annuity rate, i.e. the amount you expect from your pension.
Once all the inputs have been entered, the NPS calculator will start calculating the amount of pension you can expect at maturity.
The calculator summarizes your pension account at retirement, including the total amount you may have contributed during the term and the corpus generated at maturity.
Also, the NPS calculator calculates your expected monthly pension based on the expected return on annuity.
Drawing on NPS calculation
Here is an example to help you understand how the NPS calculator calculates your monthly pension.
Mr. Vineet is a 24 year old Central Government employee. He subscribes to the National Pension Scheme and decides to contribute Rs. 2,000 per month to the scheme. NPS matures when the customer turns 60 years old. This means that Vineet will be able to contribute to the scheme for the next 36 years and expect an annual return on investment (ROI) of 9%. In the same line, he wants to buy annuity for 50% and expects 7% return on annuity.
Click Here To NPS Calculator
At the time of retirement generated by the NPS calculator, the status of Vineet's pension account will be as under:
Total Investment: Rs.8,64,000
Total fund created: Rs. 65,08,958
Also, a summary of their pension account will be generated by the calculator.
Combined value: Rs. 32,54,479
Annual Value: Rs. 32,54,479
Expected Monthly Pension: Rs. 18,984