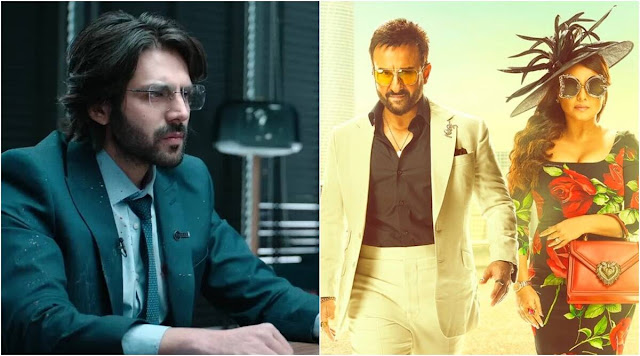 Saif Ali Khan, Siddhant Chaturvedi, Sharvari Wagh and Rani Mukerji starrer new film 'Bunty Aur Babli 2' has been released in theatres. Do you watch movies on weekends or not? Read review.
salient feature:
Abhishek and Rani Mukerji were paired in 'Bunty Aur Babli'.
In the sequel of the film, Siddhant and Sharvari become Bunty-Babli and book people lime.
Pankaj Tripathi plays the role of Inspector Jatayu Singh in the film.
highlight text
#1 Social Signing App! sing songs with neha kakkar
● Cast - Saif Ali Khan, Rani Mukerji, Siddhant Chaturvedi, Sharvari Wagh, Pankaj Tripathi.
● Director- Varun V. Sharma
● Category- Hindi, Comedy
● Time - 2 hours 25 minutes
● Rating - 2.5/5
The film 'Bunty Aur Babli 2' is in discussion for the last few days. The film is a sequel to the 2005 film Bunty Aur Babli. However, this time Saif Ali Khan has been replaced by Abhishek Bachchan and Pankaj Tripathi has been taken in place of Amitabh Bachchan. On the other hand, Siddhant Chaturvedi and Sharwari Wagh cheat people by becoming Bunty-Babli.
Story:
After watching the trailer it is clear that this time too the Bunty-Babli pair is cheating people. But this time the pair is Kunal (Siddhant Chaturvedi) and Sonia (Sharwari Wagh). Rakesh (Saif Ali Khan) and Vimmi Trivedi (Rani Mukerji), who duped people by posing as Bunty Aur Babli, left this dirty business 15 years ago. Now leading a simple life in Fursatganj. Rakesh is a ticket collector in Railways while Vimmi is a housewife.
One day both of them come to know that someone is cheating people by taking the name of Bunty-Babli. The thugs are Kunal and Sonia who have passed engineering. Police Inspector Jatayu Singh (Pankaj Tripathi) enlists the help of the old Bunty and Babli to nab the new Bunty and Babli. The story of this film is how these people will reach the new Bunty and Babli.
Review:
Due to the popularity of the old 'Bunty Aur Babli', an attempt has been made to make this film a success. Varun V Sharma, who is directing the first film, is struggling to take the story of the film forward. In the film, the pair of Siddhant and Sherwari is seen adopting an interesting trick to deceive people but the whole film seems childish. The first half of the film is spent in making the base of the film. While the plot of the film is ready in the second half but the story and screenplay seem without logic.
acting:
The film stars Saif Ali Khan, Rani Mukerji and Pankaj Tripathi. Siddhant Chaturvedi and Sherwari Wagh also look promising. But the loose story and bad script have made everyone's acting lazy. The pairing of Rani Mukerji and Saif Ali Khan is jam and they breathe life into the role of a middle-aged couple. While Siddhant has played his character very hard, Sherwari is seen with confidence in the first film. The jodi is good and they have brought life to the character but the audience is not able to connect with them. Pankaj Tripathi's comic timing is amazing and he is seen playing the character of Jatayu Singh very well in his village style.
●

શિક્ષણ મંત્રી જીતુભાઈ ની પ્રેસ કોન્ફરન્સ વિડીયો જોવા અહી ક્લિક કરો
● ખેડૂતોને સ્માર્ટફોન સહાય માટેના ન્યુઝ વાંચો
see why
'Bunty Aur Babli 2' is weaker than 'Bunty Aur Babli'. The film can be seen due to the hard work put in by Siddhant and Sharvari for their roles along with the performances of Rani Mukerji, Saif Ali Khan and Pankaj Tripathi.
Tweet by Kartik Aryan

Feeling blessed with all the love coming from the industry ❤️
Can’t wait for the fans to watch it!! 🙏🏻 #Dhamaka now LIVE on Netflix! pic.twitter.com/HPrAt9v2xt